At  Encounter, we’re pretty big on religious literacy because of how it helps us better understand our neighbours, colleagues and the big world we live in. Some Buddhists (though not all; more on that later) celebrate Bodhi day today, marking the Buddha’s enlightenment. Enlightenment is a big task (I’m still working on it) so I thought we could aim for something more manageable – namely to learn a little today about the world’s fourth largest religion. Below are some interesting aspects I thought you might like. See how many you know.

One of the First International Traditions

Whereas many religious systems are more geographically bound – connected to this land, this mountain, or this ethnic community – the Buddha’s teachings were aimed more universally, allowing it to become one of the first international religions. Founded in India, it spread throughout south and east Asia and, in the past century, to the whole world.

In a university classroom today, you are unlikely to encounter the teachings or practices of any religion. But, there is one exception: psychology has found the Buddha’s teachings on the mind and especially the practice of meditation to have enormous therapeutic benefits that hold up in research studies.

Permit me a slight digression here. I once heard a psychologist explaining his field’s history as having three big turns in the past century. First, Freud and Jung made us think our thoughts held deep clues and needed to be investigated to divulge their secrets (tell me about your mother). The second turn was cognitive behavioural therapy which spent less time deciphering your thoughts and more trying to change them. This effective approach is still widely used. The third insight was from Buddhism – that closely watching one’s thoughts reveals how fleeting they are. As such, they lose some of their hold over you as anxieties and desires seem like momentary states, a realization that can grant freedom and serenity. The first two turns emphasized the importance of our thoughts whereas in Vipassana meditation (a technique the Buddha may have invented), we learn to question the importance of our thoughts. That someone from 2500 years ago could so influence modern mental health astounds me.

Both these men analyzed the mind. One stressed the critical importance of even trivial thoughts and dreams that could reveal valuable secrets to unlock your psyche. The other undermined the criticalness of each thought, emphasizing how fleeting they are. He found this realization could free us of their grasp, granting both peace and wisdom.  Photo Credit: Canva.com

What this Statue Means

This image, seen in temples around the world, is about today (Bodhi Day) as it signifies the moment of the Buddha’s enlightenment. His enlightenment occurs when he touches the ground and so the hand is always not quite touching yet – it’s a moment of anticipation and also a call to you to do the same, to cultivate your own Buddha nature and pursue your own awakening. 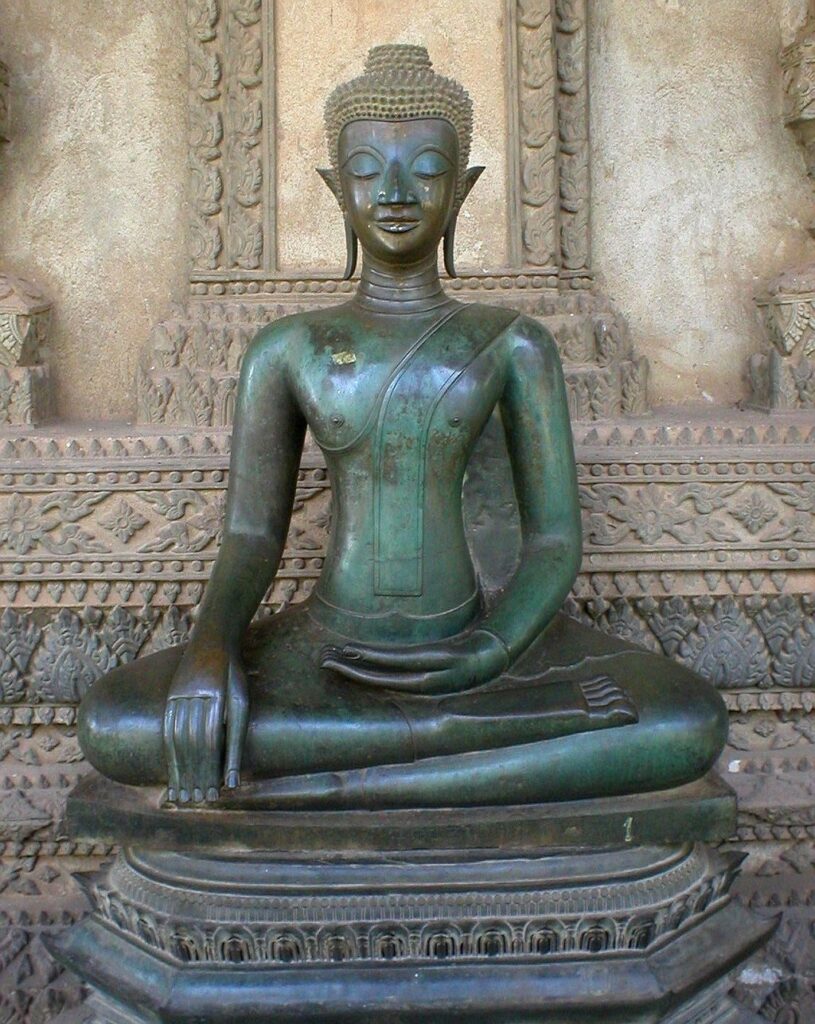 This is the Buddha’s death pose. He is eighty years old and has eaten poisonous mushrooms someone served him. Dying, he utters these last words: Be lamps unto yourselves, work out your own salvation with diligence. The Buddha believed he had forged a path out of suffering but that you would need to pursue it on your own, like following good advice on exercise and diet. No one could simply rescue you from the work of acquiring insight. Which leads to our next point.

The Buddha was not technically an atheist as he thought gods existed. But they were unimportant. They were subject to death and rebirth according to the laws of karma so they were just other beings, like humans or animals. The goal of enlightenment did not involve them and so they became irrelevant. That was an unusual position in India 2500 years ago and is unique among the globe’s largest religions

This one is hard. The Buddha investigated the self and found only flux. Changing emotions, changing moods, changing thoughts, and a changing body. And he eventually concluded there was no eternal self, meaning no soul or inner essence. Instead, we are a series of everchanging processes, an endless series of verbs. Processes allow for continuity of course through cause and effect. There were things that happened to a person named Brian 30 years ago and choices made that have led me here. But I am not really the same person as that younger me. English is famously a noun-oriented language but this view sees people as verbs more than nouns. This does not fit Western thinking but has been key to the therapeutic benefits I mentioned above as it contributes to the sense that things are fluid, that we are not fixed or defined.

How Celebrated? And When?

Different Buddhist communities celebrate the Buddha’s enlightenment on different days. Those using a lunar calendar celebrate sometime in January or February whereas in Japan, it is December 8 each year. Other Buddhists celebrate Wesak in May which marks the birth, death and enlightenment of the Buddha all on one day.

Whenever celebrated, Bodhi day is not marked by parades or loud noises. Rather it is a reflective day for meditation, chant, prayer and teaching. Many Buddhists decorate their homes with colourful beads or lights where the different colours symbolize that there are many paths to enlightenment. Many eat meals of rice and milk recalling a famous meal given to the Buddha by a woman before his enlightenment (she saves him actually; behind every successful man….). He achieved enlightenment while sitting under a fig tree so decorating fig trees is also common as are heart shaped cookies that recall the heart-shaped leaves of that type of tree. Some will light candles at night for the next 30 days to emphasize the quest for enlightenment and some will share gifts with loved ones during that period as well.