Last week, I attended the Anima Leadership Institute’s “Deep Diversity” course. I learned of Anima through the work of one of its co-founders, Shakil Choudhury. Choudhury’s book (“Deep Diversity: Overcoming Us vs. Them”) is one of the best books I have read in the field of diversity, equity and inclusion (DEI).

Choudhury shares in the opening pages how he became deeply invested in anti-racism work in the 1990s but felt himself starting to burnout. He began seeing racism and discrimination everywhere and, given the seemingly limitless problems, became bleak about the prospects for justice. He found himself consumed by anger and negativity and even noticed these problems echoed in the activist community more broadly. Activists too, he realized, struggled with power dynamics, egos and toxic uses of power.

Choudhury had reached a low point. Following these realizations, he entered a period of self reflection and study and began creatively adding new learnings from fields around emotional intelligence, neuroscience, social psychology and mindfulness. These new fields helped him better understand himself and the larger picture and led his work in new directions. As I read the preface to Choudhury’s book, I found myself underlining furiously. Much of his work interlaces with my own academic studies and with the work of Encounter.

While I cannot capture his entire approach here, I want to highlight a few central planks. First, Choudhury attends rigorously to emotions. I think this is absolutely critical. Changing people’s views on matters towards religious communities or any marginalized group is, in truth, emotions work. Our perceptions of others are instinctual and operate below the level of rational thought. Our reasoning gets steered by the deeper feelings – those of fear, threat, and unease if we feel that power is shifting. In my own dissertation, I emphasized that political movements were largely about shifting how we feel about a thought (such as how one feels about LGBTQs or Muslims). 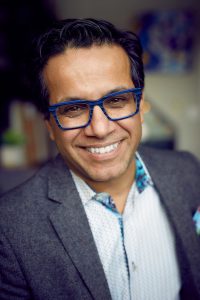 Second, Choudhury learns from the field of cognitive science. Us versus Them is an ingrained part of the human brain. Realizing this does not make it inevitable however; rather it prepares us to recognize these patterns and to know we can do something about it. Here, Choudhury combines the learnings on emotions and cognitive science to point out that change is achieved by compassion and not shame. This too is a pivotal insight. Activism is vital for pursuing social change but can sometimes slip towards accusation and shame – this is understandable given the suffering many have undergone. But shame is a terrible motivator. We need other tools to effect change.

Finally, Choudhury also emphasizes the role of relationships. And this is the heart of Encounter and what gives the centre its name. It is by entering other communities’ spaces, witnessing their rituals, and engaging in dialogue that barriers are broken down. Emotions are altered as we encounter the beauty of another tradition or establish personal connection with a rabbi, monk, or volunteer serving us food. Choudhury nicely sums up that change comes from “relationship building rather than political ideology” (xv). He points out that this approach is also more personally sustainable. I might add that it is more sustainable for community and society as well.

Choudhury’s book is being re-released this month, updated and with a focus on racial justice. I highly recommend his work. It will get you thinking about yourself and about transformation using the tools of compassion towards ourselves and others.