There’s an Election You Say?

As all of you know, there was a big election this week in Prince Edward Island. What’s that? Another election, you say? Hmmm. Well, I considered not writing about any elections, but that seemed impossible. I will shift to other topics next week but for now…

Much has been written these past 4 years about White American Evangelicals’ (WAE) support for Donald Trump. Talking heads typically attribute this support to WAE’s pro-life commitments. However, Ryan Burge – an American Christian who knows the data of American Christianity better than anyone IMO – shows convincingly in just a few graphs, that WAEs are more likely to support Mr. Trump if they are anti-immigration than if they are pro-life.

This gets at something I’ve been reading about France. Mayanthi Fernando has a wonderful academic book on France’s Muslim population. Muslims in France suffer economic and political marginalization resulting in disproportionate unemployment, incarceration, and over-crowded schools, while studies show a Muslim name on a C.V. hurts job prospects (here).

Fernando observes that one problem is that French identity has an internal contradiction. She analyses prominent French thinkers and writers (some popular, some academic) and notes that on one hand, they discuss the republic as based on universal values of liberté, égalité, and fraternité but on the other hand, they describe the country as based in a particular culture and history. A French Muslim may believe in the universal values but often not fit the particular image of what a “Frenchman” or French woman is, neither racially nor religiously. Especially if you’re religious, there’s a very different perception if you’re Catholic (thus French) versus Muslim (not so French).

I think this contradiction applies in many places, including in the USA. At the country’s founding, there were universal claims – All are created equal – but the country was also founded on a particular identity, namely as a white Christian nation that denied Blacks and the Indigenous their humanity. I think this struggle continues today between a vision of the United States as a land of opportunity for all who follow its laws and another vision that sees “real America” as White and Christian, which fosters Muslim bans, anti-Hispanic sentiments, and an enduring sense by many African-Americans that their lives do not matter.

Canada struggles with this tension too as evident in Quebec’s Bill 21 or the unbearable history (and current reality) with First Nations communities.

The particular – the communal – often gives us place and belonging. How to manage that without exclusion is the real challenge. 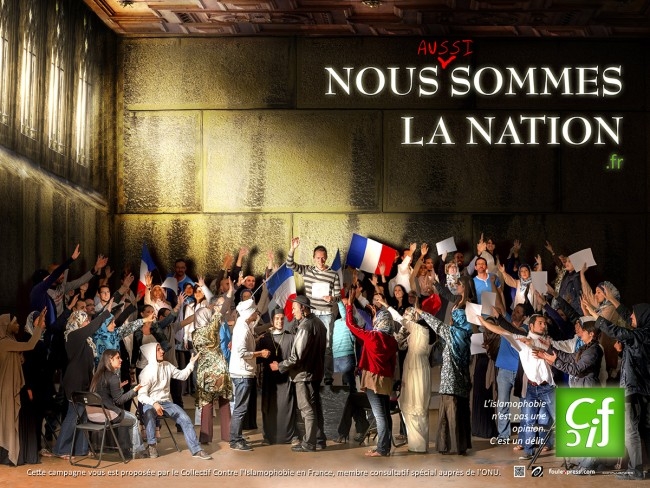 This image updates the famous Tennis Court Oath painting, a seminal image of the French Revolution. This new version includes brown people, visibly Orthodox Jews, and women with veils, who nonetheless uphold the French flag and copies of the oath with its revolutionary ideas. The text reads “We too are the nation.” Fernando relates that the Paris transit authority rejected the ad due to its religious and political nature.