Wicca & Hallowe’en – Marking the Old and the New

Saturday is Hallowe’en, a North American cultural day that celebrates dressing up and make believe. However, for a small segment of the population, known as Wiccans, Hallowe’en is a sacred day that marks the new year.

Wicca is both old and new. It aims to be old, to revive ancient pre-Christian European traditions, and thus worships the Norse gods, Germanic gods, Celtic deities as well as those of Greece and Rome amongst others. At the same time, Wicca is new. It emerged in the mid-20th century and practitioners accept that only so much is known of these older traditions and, hence, the revival has required invention and creativity.

The general public does not know much about Wicca or Neo-Paganism (the former is a subset of the latter category) and many can be wary or dismissive of these religious traditions. An eternal truth of religions is: new and small religions almost always generate more hostility than older, established ones. Christianity was considered a weird cult until it acquired enough history and adherents. Mormonism has followed the same trajectory. Many Wiccans hide their identity and are not out of the “broom closet” to their family or at their workplaces. However, there are likely more Wiccans than you think. Best estimates suggest there are more than 1 million adherents just in the USA.

What does Wicca teach? It’s a nature-based religion that believes the universe is suffused with powers or energies. Individuals can access these powers by performing magick (the “k” distinguishes their practices from stage magic) through invocations and rituals. The tradition is polytheistic, honouring divinity in many names although sometimes emphasizing the goddess and god behind the many forms.

The cultural celebration of Hallowe’en emerged from ancient Celtic practices where the dying vegetation indicated the end of the year. As time transitioned from one year to the next, the veil between this world and the next was felt to be especially thin, aiding the transition of spirits from one world to the other. People carved scary faces in gourds to frighten such spirits from entering their home while sweets might be provided to aid them in their journey to the other life.

Thus, while Wicca is both old and new, Hallowe’en also marks the transition from the old year to the new. This year is unusual in that the scary and invisible monster that threatens our communities is a microscopic virus. The cultural holiday may even be curtailed in many places but Wiccans will be performing rituals and hoping the spirits bring a brighter future. 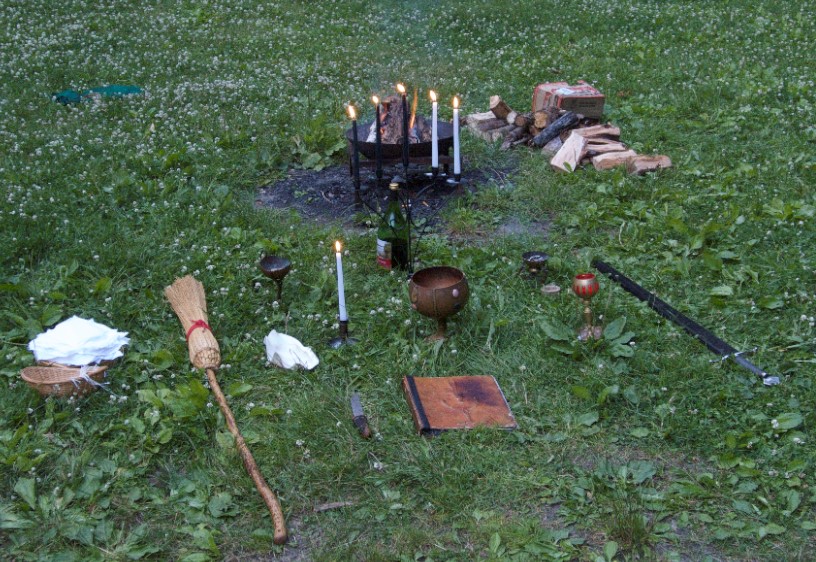 A Wiccan altar, from an outdoor ritual I took a group to observe.