Santa Muerte and the Day of the Dead

As trade, migration, and the internet make our globe more connected, many of us are learning more about the world’s cultures. One recent example is the growing awareness of two Mexican phenomena: the Day of the Dead and Santa Muerte (Saint Death). The Day of the Dead is a unique Mexican festival while Santa Muerte – the fascinating skeleton saint – might be the fastest growing new religion in the Americas. One scholar thinks there are 12MM Santa Muerte devotees which rivals the number of Jews or Mormons. Below, we will explore these two unique religious expressions and I will share an upcoming opportunity if you wish to learn more.

Some scholars suggest Mexico has a unique death culture. If death in the West is met with fear and aversion, in Mexico, the natural sadness is mingled with humour and celebration. The Day of the Dead celebrates those who have died by erecting altars to them. Photos of the deceased are central in these altars, along with cempasuchil (orange marigolds that entice the spirits with their scents), candles, and things the deceased liked. Adults being honoured might be offered alcohol and favourite foods while deceased children might be offered toys. Sugar skulls are also popular as sweets offered to the deceased and for the living to eat to remember that death is a sweet passage to something better. 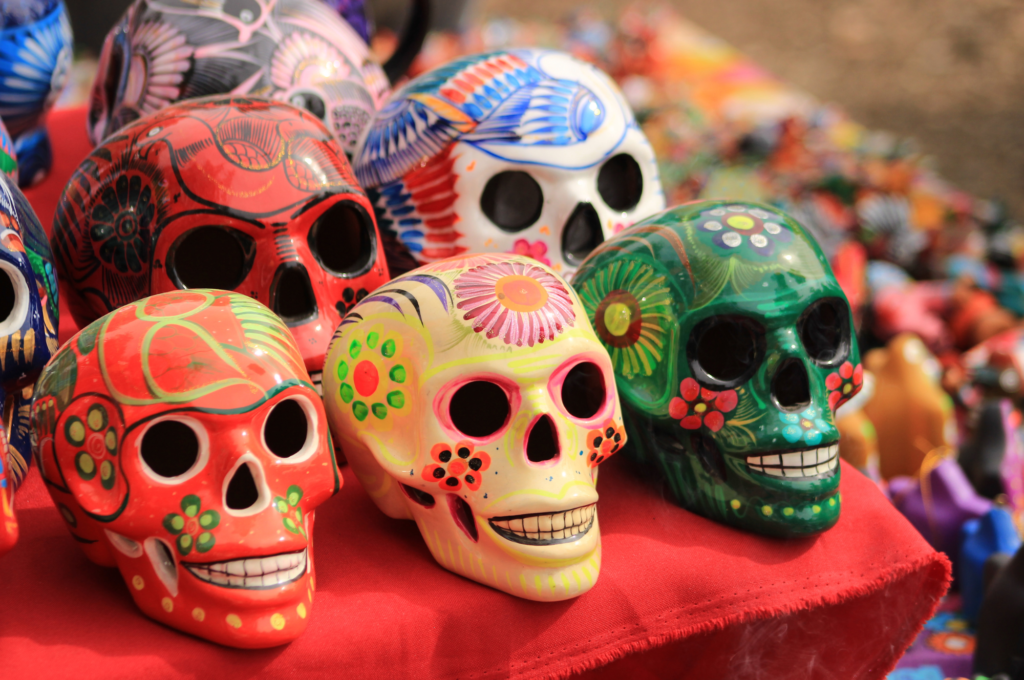 Photo credit: Canva.com. Sugar skulls remind us that death is a sweet passage to the next life.

The day is a special time for communing with the spirit of deceased loved ones, which helps keep them present in our lives. People also exchange gifts with the living and some even create fun mock eulogies of still-living friends or family members.

One usual fact: in 2015, the James Bond movie Spectre had a Day of the Dead parade scene set in Mexico. No such parade actually existed…but the next year, the city hosted one and 250,000 attended with many costumes and floats looking like those from the movie. The parade is now an annual event. Sometimes life imitates art. 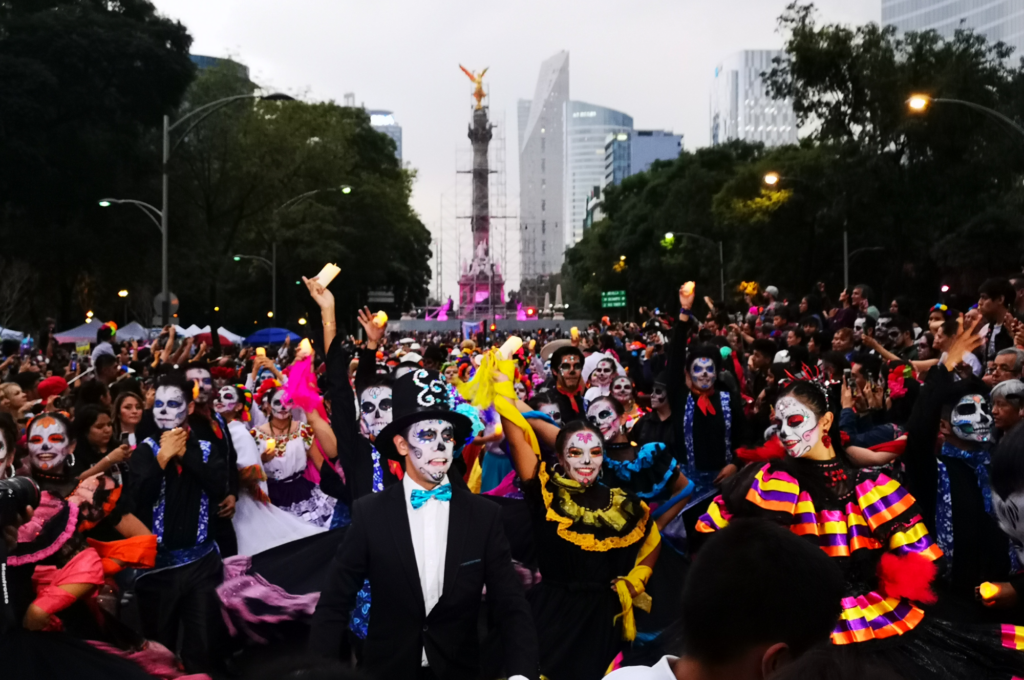 Santa Muerte (“Saint Death”) is a fascinating and unusual Mexican folk saint. While the Roman Catholic Church canonizes official saints, folk saints emerge from popular acclaim. The Church’s saints are often Europeans but Latin America’s folk saints are often people who lived in the Americas, making them more approachable and relatable. Even among folk saints, however, Santa Muerte is truly unique for she is not based on a real person – rather, she is death personified.

Where did she come from? Well, many claim she has Indigenous roots as the Aztecs had a goddess (and god) of death sometimes depicted as skeletons. However, scholars believe she comes from Europe’s Grim Reaper, brought to the Americas by Spanish priests trying to evangelize the Indigenous peoples. Some Indigenous people saw the Reaper as another saint and, somehow, her gender changed as well. The Church tried suppressing these practices but only succeeded in pushing this devotion underground.

This underground existence means her history is murky – after a brief reference to her in 1790, she disappears in the historical record until the 1940s, when she emerges as a love sorceress that women prayed to seeking love or asking her to punish wayward husbands to make them reform their ways. Devotees worshipped in secret until, in 2002, everything changed due to a simple quesadilla vendor. Dona Queta received a large Santa Muerte statue as a gift but the statue was too big in her cramped house. She opened the doors for space and her customers, seeing the image, asked if they could pay homage to the image. It mushroomed and has now been prayed to by hundreds of thousands. Suddenly, people pulled their altars literally out of closets and began openly showing their devotion. Dona Queta is considered the movement’s godmother as her simple brave actn made Santa Muerte devotion visible. 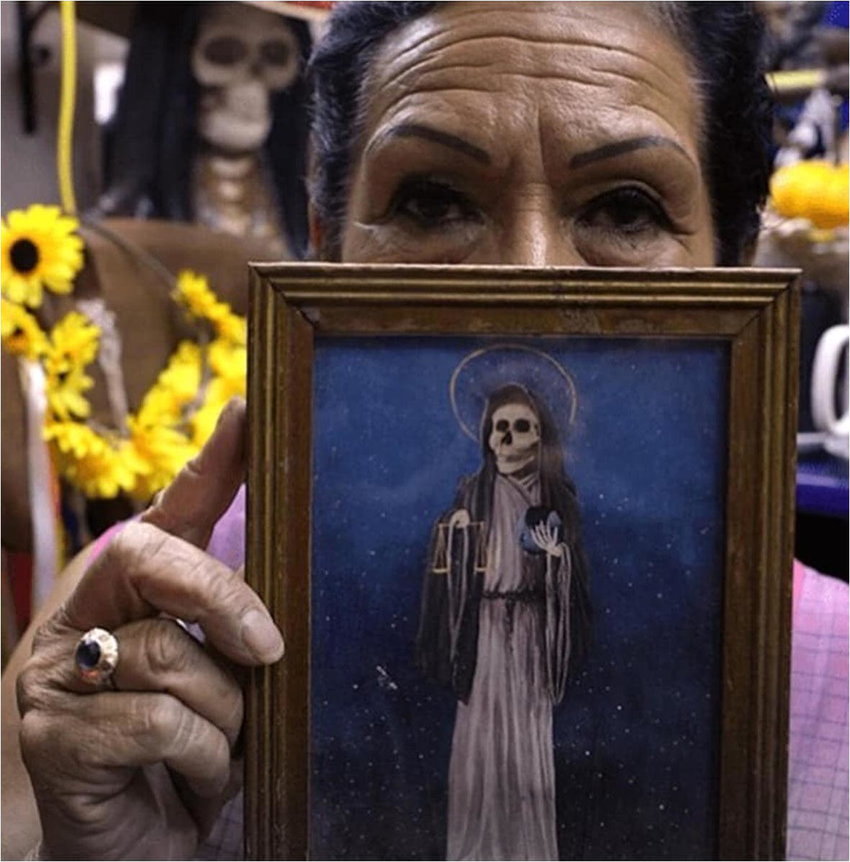 The Pretty Girl (Santa Muerte has many nicknames) is especially popular with the marginalized. Women, LGBTQ and the poor are all overrepresented among her devotees. Death in Mexico is seen as the great equalizer, coming to the rich and powerful as much as the commoner. Unfortunately, one group of devotees has tainted Santa Muerte’s public image – namely devotees involved in the drug trade. She is sometimes called the “narco saint” as her shrines have been found among drug gang members and leaders, who often ask her to harm their enemies and hide their drug shipments. However, she is also popular amongst the police, prison guards, and those victimized by crime, all of whom ask for her protection. American TV (e.g. Breaking Bad) has contributed to sensationalizing the devotion by criminals.

Devotees often construct home altars of the Bony Lady (another nickname). As mistress over life and death, she carries a scythe and often the scales of justice. Sometimes she has a globe in her hand or under her feet showing her dominion. People adorn her altars with flowers, candles and things she likes. Her tastes are very Mexican: tequila, tobacco, chocolate – all three are indigenous to the Americas – soda (Mexicans drink a lot of pop), beer and candy.

She is seen as a very powerful saint who responds rapidly. Her ordinary tastes make her relatable and people affectionately call her the Beautiful Girl, the White Sister, Godmother, and more. Many followers remain Catholics – priests and the Pope has denounced this – but other followers are loyal to her alone. Despite her many opponents, the Skinny Lady’s devotees seem to grow in numbers each year. 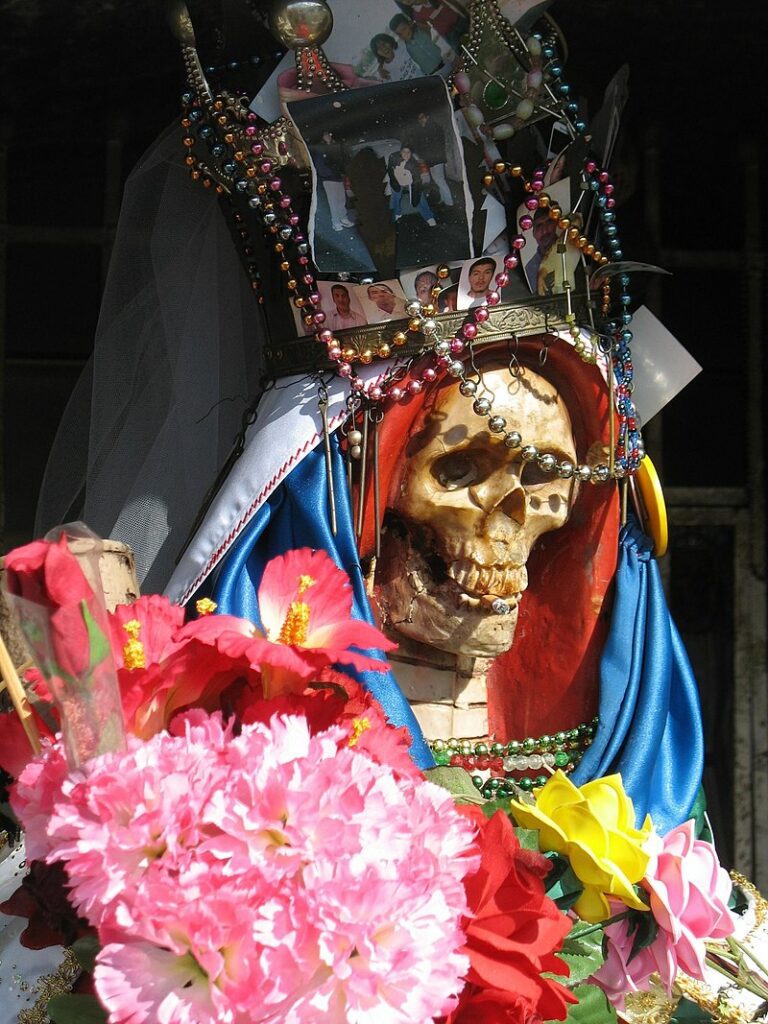 Photo credit: By Not home – Transferred from en.wikipedia, Public Domain

With the Day of the Dead and Santa Muerte, Mexicans, living in a country with crushing poverty and terrifying gang violence, have come to terms with death in ways that reduces the fear and partly reframes death as the great equalizer and a natural part of life. If you’d like to learn more, the best source on Santa Muerte is Andrew Chesnut’s excellent book Devoted to Death (also check out his dedicated website on her). In addition, I will be giving an online talk on Tuesday discussing both Santa Muerte and the Day of the Dead that is open to the public.

In the meantime, keep an eye out for the Bony Lady in esoteric shops. As for the Day of the Dead, we might all value a day to consider those we’ve lost. A happy Day of the Dead to any of you who might celebrate.