Vaisakhi – Being a Saint and a Soldier

Sikhs are a community dedicated to service. Whether it’s through their langar kitchens or their commitment to social justice, the community stresses from an early age that one is here to serve. With Sikhs celebrating Vaisakhi today, their most important holiday, I spoke with Simran Jeet Singh, an academic, activist, author and interfaith leader and one of America’s most prominent Sikh voices. Together, we discussed what “seva” or service means to Sikhs, about the calling to be both saints and soldiers, and how equality was advanced through common Sikh names. I have written more on the ABCs of Vaisakhi here but today, with Simran, let’s go deeper to glimpse a bit of the heart of Sikhism with a wise and compassionate man. 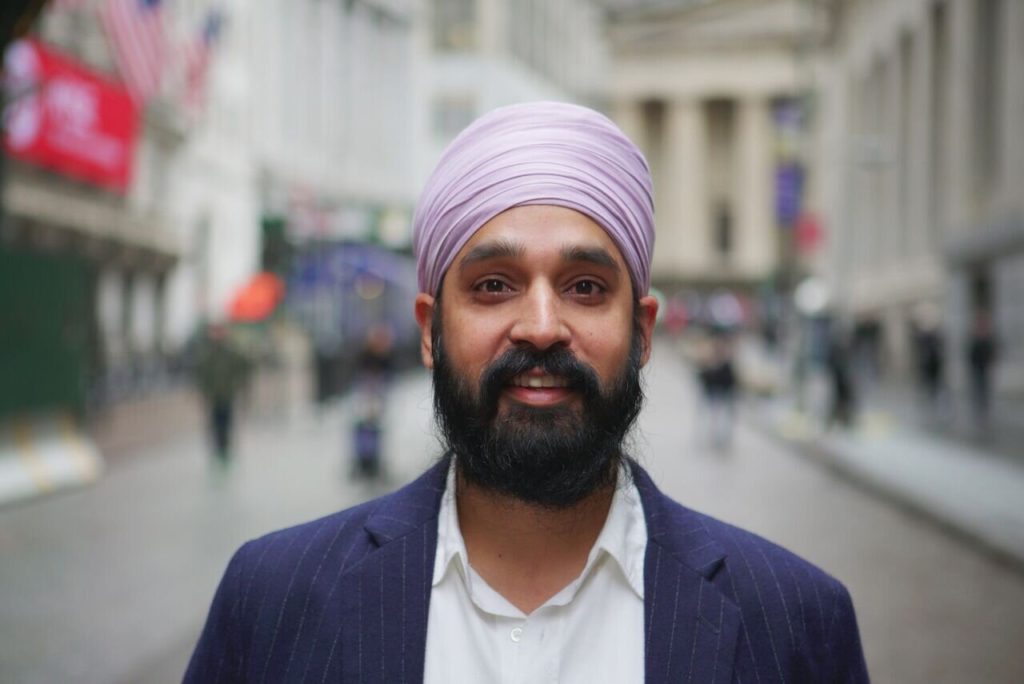 First You Give, Then You Take

One of the most quintessential Sikh practices is the langar kitchen which operates in every gurdwara (temple) and provides free food to all who enter. Several things stand out about the langar – first, that it is offered to everyone. Second, they are so committed to this idea, that every gurdwara has a large orange flag on a high pole outside so people from far away can see it and know there’s food there. And third, when you go, you are struck by how often the young are involved in serving food. Adults and youth work together to cook, to serve, and to clean up. Simran said this is how you internalize, via practice, a key Sikh teaching: “first you give, then you take.” This practice reaches its apex at the Golden Temple in India, where Sikhs serve 100,000 free meals each and every day. 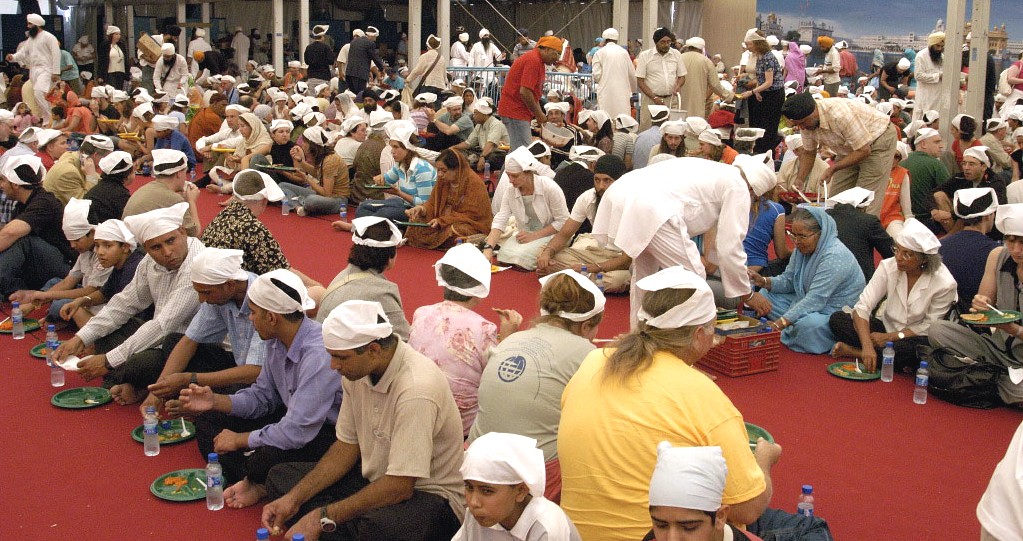 Photo credit: Photo taken by GNNSJ at their langar hall and gurdwara, Wikipedia.com

This Sikh commitment to “seva” (service) shaped their response to Covid. The media took notice as the New York Times, the Globe and Mail and other outlets reported Sikh communities providing thousands of meals to health care workers, shut-ins and truckers. During early Covid, when panic spread as no one knew how the virus spread, truckers were struggling even to find bathrooms. Sikhs in places like Calgary rented out portable washrooms and provided food at a time when the risks were unknown.

A Saint and a Soldier

At Vaisakhi in 1699, the Sikh leader initiated some Sikhs into a new calling, the “Khalsa.” “Kahlsa” Sikhs carry five items including the kirpan, a dagger which is all worn at all times and is to remind all Sikhs that they are to be sants and sipahis, meaning both saints and soldiers. These may sound like opposites but Simran says erasing that binary is the point.

He explains that the Sikh gurus believed that the religious calling was both personal and social. One was to “develop oneself and to develop others.“ Sikhs are to attend to both piri and miri meaning both the spiritual and the temporal. India has ascetics and holy men who sometimes retreat from the world but Sikhs are called to both meditation and service (two of Sikhs’ three key principles). At the gurdwara, you meditate in one room and serve food in the other. The kirpan and its saint/soldier ethos tells Sikhs, yes, develop your relationship with God but you also have a “responsibility…to stand up for people who are facing any sort of discrimination or oppression.”

Sikh Gurdwaras (temples) display their flag on extremely tall poles to indicate that food is available here for any who come. Photo credit: The Nishan Sahib, Canva.com

From the Gurdwara to Politics

If Sikh service starts by offering langar at the temple, then expands to offering food during Covid, it expands further into the realm of politics. Since faith must foster justice in the world, Sikhs have been very noticeable in Canada in providing political leadership. The Canadian community is quite small yet has provided a Sikh premier (Ujjah Dosanjh), the current NDP leader Jagmeet Singh, three different cabinet ministers in Trudeau’s government, and the current mayors of both Edmonton and Calgary. That is a lot!

Jagmeet Singh demonstrated his Sikh values when he was accosted at a campaign rally by a woman yelling insults at him and his “shariah law.” Although shariah has nothing to do with Sikhism, Singh did not say “I’m not Muslim” as that would be throwing another community under the bus. His brother, accosted on a Toronto street with the same shariah accusation, also refused to say “your hatred is for someone else.” Sikhs have done this so often, a Texas imam penned an open letter thanking them for continually standing beside their Muslim neighbours. At his campaign event, Singh told the woman she was loved and valued while his campaign team changed “love and courage,” (the title of Singh’s autobiography) which, as Simran noted to me, is another phrasing of being a saint and a soldier. 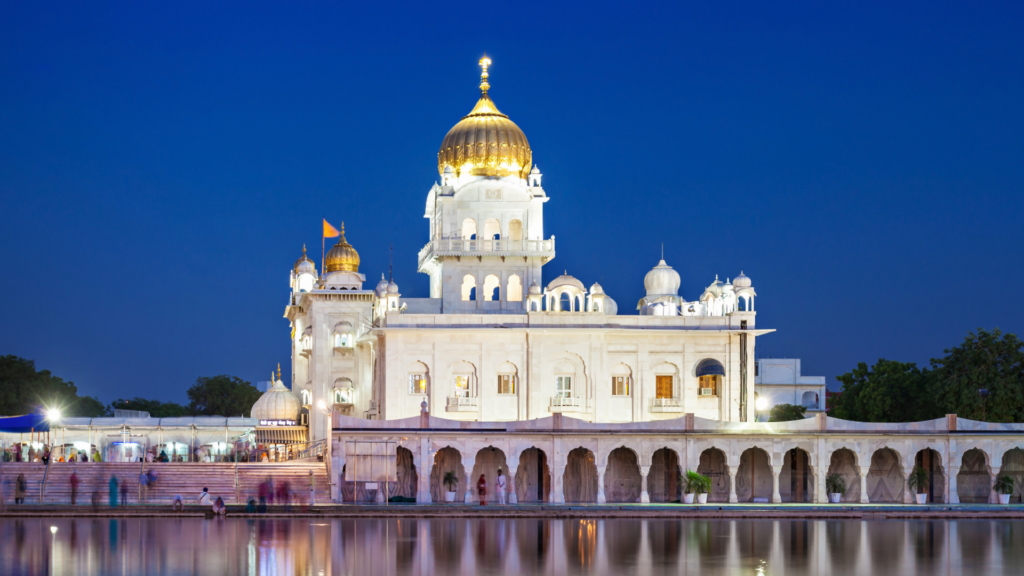 Is a Sikh a Sikh by Any Other Name?

Sikhs’ commitment to justice comes paired with a strong ethos of equality. When the Khalsa was initiated, the Sikh leader gave initiates new names, using Singh for men and Kaur for women. Simran shared that this was to counter the caste system. Sikh leaders opposed caste but efforts to erase these distinctions ran up against a problem: people would know your caste by your last name. And so, Simran explained, the names of Singh and Kaur helped erase caste identity and – as both names were associated with royalty – also suggested that everyone is worthy of the highest dignity. Simran added that giving women a different last name was particularly bold. In the caste system, women were lower than men and somewhat their husband’s property, reflected partly in assuming the husband’s name. The name “Kaur” suggested individuality and equality was thus “a powerful and creative method of challenging patriarchy.”

This is Sikhism at its best. Kids from an early age learn to give and then take as they go to gurdwara and serve others while also being fed. Every time they enter their building, they see the big flag showing their place of worship is open to all and feeds the hungry no matter who they are. They see that when Covid sews panic, their community steps up and takes risks in those early weeks to help those in need. They see prominent community leaders standing with their Muslim brothers and sisters because a good soldier stands for justice for others and not just for oneself.

The “truly wise” Simran adds, “live both at the same time,” being “spiritually grounded, working on their spiritual self and being politically committed.” Not a bad motto for life.