Canada is in the midst of a federal election. And while people often say religion and politics don’t mix, I contend they are always mixing. Some of our most powerful political movements and initiatives have stemmed from leaders bringing the very best teachings into their work: Martin Luther King Jr., Tommy Douglas, Ghandhi, the American Black Church and Indigenous activists working for truth and reconciliation in Canada. Of course, religion and politics is not always beneficial – we are approaching the anniversary of 9/11 while witnessing the Taliban’s disturbing takeover of Afghanistan. Religion and politics yields both the heroic and the horrible. As with all mixes, the ingredients matter.

Fortunately, religiosity’s presence in this election has mostly been quite positive. Just this week a tweet from Conservative candidate Melissa Lantsman caught my attention. She apologized for her 2015 tweet which attacked Liberal leader Justin Trudeau for opposing then Prime Minister Stephen Harper’s attempt to ban women from wearing the niqab while taking the citizenship oath. Lantsman said her view has since “evolved” and decried “Islamophobia, antisemitism, and hate.”

That 2015 election included a Conservative promise to set up a telephone hotline where you could report “barbaric cultural practices.” It was a dog whistle. That the same party has now disavowed these earlier moves is a positive development. Right of centre parties are strongly anti-immigrant in the USA, France, Germany and elsewhere. However, Canada’s Conservative party has often courted immigrants, such as Harper sending Jason Kenney regularly to mosques and temples. Hopefully this is the continued path for Canada’s Conservatives as it would bode well for the country. 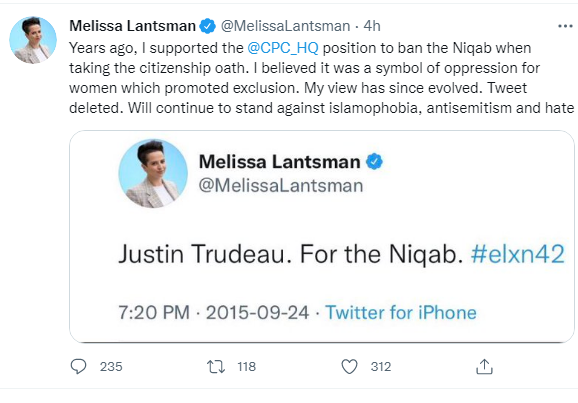 Exposure to a more accepting society and a deeper understanding of each other matters.

The most visible evidence of these shifts might be our collective response to NDP leader, Jagmeet Singh. Many polls show Singh as the most popular of all the federal leaders. Singh, of course, is a Sikh, a fact that hardly makes the news these days, even when he is seen on the campaign trail openly wearing his kirpan. This is a vastly different response than in 1988 when another Sikh, Baltej Singh Dillon had to go to the Supreme Court in order to wear a turban as a member of the RCMP. While Dillon won the case, the matter was hotly contested at the time and a matter of heated public debate. Now a major party leader, hoping to be prime minister, can wear the turban and it garners little comment.

Exposure and familiarity has made a huge difference to the way our country has reacted to Jagmeet Singh. Sikhs have been fairly prominent in Canadian politics, supplying a former provincial premier, the current defense minister, and now a party leader. I believe some of this notable presence is due to the strong emphasis in the tradition on both justice and on “sewa” or service. Importantly, these teachings are ingrained through practices like langar (the provision of free food to anyone who enters a gurdwara) and through other acts of service. I think this emphasis has fostered a real sense of civic commitment as almost a duty.

Not all is well, however in the mix of religion and politics in Canada. One troubling matter is Quebec’s Bill 21 which I have written on before. The bill prevents anyone with visible religious garments for working for the provincial government. In short, someone with a turban, kippa or hijab cannot be a teacher, a nurse, a police officer or a judge. It is a uniquely terrible law in North America that discriminates against religious minorities. The various party leaders avoid speaking against the bill because it might cost them seats in Quebec where the bill is popular. That such a law persists in Canada is a stain on the country and affects the lives and future of Quebeckers every day.

So what is the takeaway? I think it is inevitable that religion and politics will influence one another – the real question is what will the nature of that influence be? The ingredients really are critical and one key lesson is that exposure matters. Exposure creates familiarity and comfort. It counteracts the Single Story which hems us into reactive, harmful responses to differences as evidenced by Bill 21. It opens us to new connections and ways of thinking. Next week I will be teaching my series of classes classes based on 5 religions and as part of that program, I invite practitioners of these different faiths to come and share about their communities, their practices, and their internal diversity. And my students love it. That exposure to these leaders and to their stories helps us feel connected to others and connection makes us all feel better. Like we belong. Like we’re all in this together.