(The following is an open letter from my friend, Sheikh Imran Ally, a long-standing Toronto imam and police chaplain, issued in the wake of the London murders.)

Deliberate hate crime public murder on a Muslim family is Islamophobia and Terrorism Hate crimes are despicable and must stop however there has been a disturbing spike of hate crimes in Canada, with attacks against Canadian Muslims more than doubling. Five members of a Muslim family were out for a walk – like many of us during the pandemic, but because of their visible faith identity, they were publicly murdered and only the boy aged nine, the family’s only survivor, is hospitalized with serious injuries. Four members (a 74-year-old woman, a 46-year-old man, a 44-year-old woman, and a 15- year-old girl) were brutally and publicly murdered on Sunday (June 6) when the driver of a pickup truck intentionally jumped the curb and ran them over. “There is evidence that this was a planned, premeditated act, motivated by hate,” Detective Superintendent Paul Waight of the London, Ontario, police department told reporters. “It is believed that these victims were targeted because they were Muslim,” Waight said.

This is very scary and frightening for all Muslims and especially for those who visibly identify as Muslims when they are in the public, I am one!

No one should have to look over their shoulders because of their faith but this recent attack is truly a wakeup call. At a grassroots level, we need solidarity among communities and faith groups to stand up to all hate. At a time when the need for community care is paramount, heightened Islamophobia presents an opportunity for us to unite and denounce hatred together. Islamophobia doesn’t just target Muslims, sadly, it targets people perceived to be Muslims, like Sikhs, Christian Arabs, and those from Southeast Asian communities.

While all Muslims acknowledge that the vast majority of Canadians are exceptionally respectfully, welcoming, and accepting to all minorities, there must be a national strategy on all hate crimes, especially hate crimes because of faith. As Canadians, we need to do more to root out Islamophobia and hate.

The gruesome deliberate public murder on the Muslim family in London, Ontario is sending shivers to all Muslims, especially our women who can easily be identified in the public. These women are extremely paranoid about their safety (my phone is ringing off the hook) and I am very worried for their well-being and public safety. 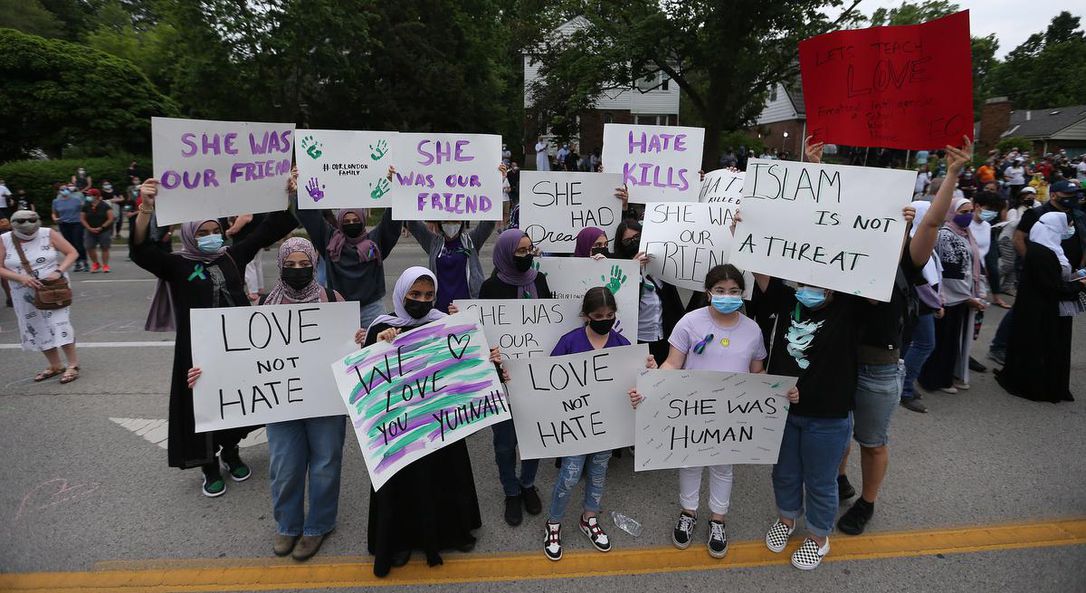 On a personal note, I am not going to change my public appearance which identifies me as a Muslim, I have been dealing with this since 9/11. I am however worried if our continued Canadian silence (no visible swift justice) against hate crime increase the odds against me and make me a prime target as a sitting duck in the public because of my religious identity which can now result in death as was in London, Ontario.

On behalf of the Muslim community, thanks to the many (faith leaders, first responders, friends, and everyone touched by this horror and loss of lives) reaching out to the Muslim community to stand with Muslims against Islamophobia and hate. Thanks to the many elected officials who have reached out to express their condemnation of this horrific tragedy and their deepest condolences, however Islamophobia has no place in any of our communities.

Prime Minister Justin Trudeau tweeted, “To the Muslim community in London and to Muslims across the country, know that we stand with you. Islamophobia has no place in any of our communities. This hate is insidious and despicable – and it must stop.”

Premier Ford said in a statement, “The horrific and deliberate attack on a Muslim family in London has left our province in mourning.”

London Mayor Ed Holder said on Monday that a vehicle attack that left four members of the same family dead and a nine-year-old child injured was “an act of mass murder perpetrated against Muslims, against Londoners.”

London police Chief Steve Williams said during a press conference, “We believe the victims were targeted because of their Islamic faith.”

If you are reading this, time is up and while support is crucial, we can’t just continue to make statements. There must be swift actions to bring justice in this case, as perhaps setting a precedence to demonstrate our outrage and seriousness may be the only way to prevent any future hate crime attacks, God willing.