Is Your Neighbour a Sikh?

Chances are high that you interact with Sikhs, either at work, in your neighbourhood, or perhaps living next door. Outside South Asia, Canada has the highest number of Sikhs, and yet the religion isn’t well understood. In honour of the Sikh holiday, Vaisakhi, which celebrates the birth of the Khalsa, I thought I’d share more about this generous religion, its history and customs. (Do note, Vaisakhi is also celebrated as the Hindu new year but as I’ve described some Hindu festivals recently, today’s focus is the Sikhs.)

The Sikh tradition (or Sikhi) was founded around 1500, about the same time as Protestantism. No two religions are the same but these two have some similarities. Both emerged from an existing tradition (Hindus for Sikhs, Catholicism for Protestantism) and de-emphasized ritual, statues, and holy physical objects, emphasizing a more interior religiosity. (Catholicism and Hinduism also have rich traditions of interior religiosity; these new movements just removed exterior forms more).

Sikhism’s founder, Guru Nanak, encounters God at age 30 and returns saying “there is neither Hindu nor Muslim,” meaning that God cares only about devotion, not group identity. Nanak taught devotion through poetic praise hymns and by organizing providing food to the needy. His followers became known as the “devotees” or “students” of God – Sikhs. 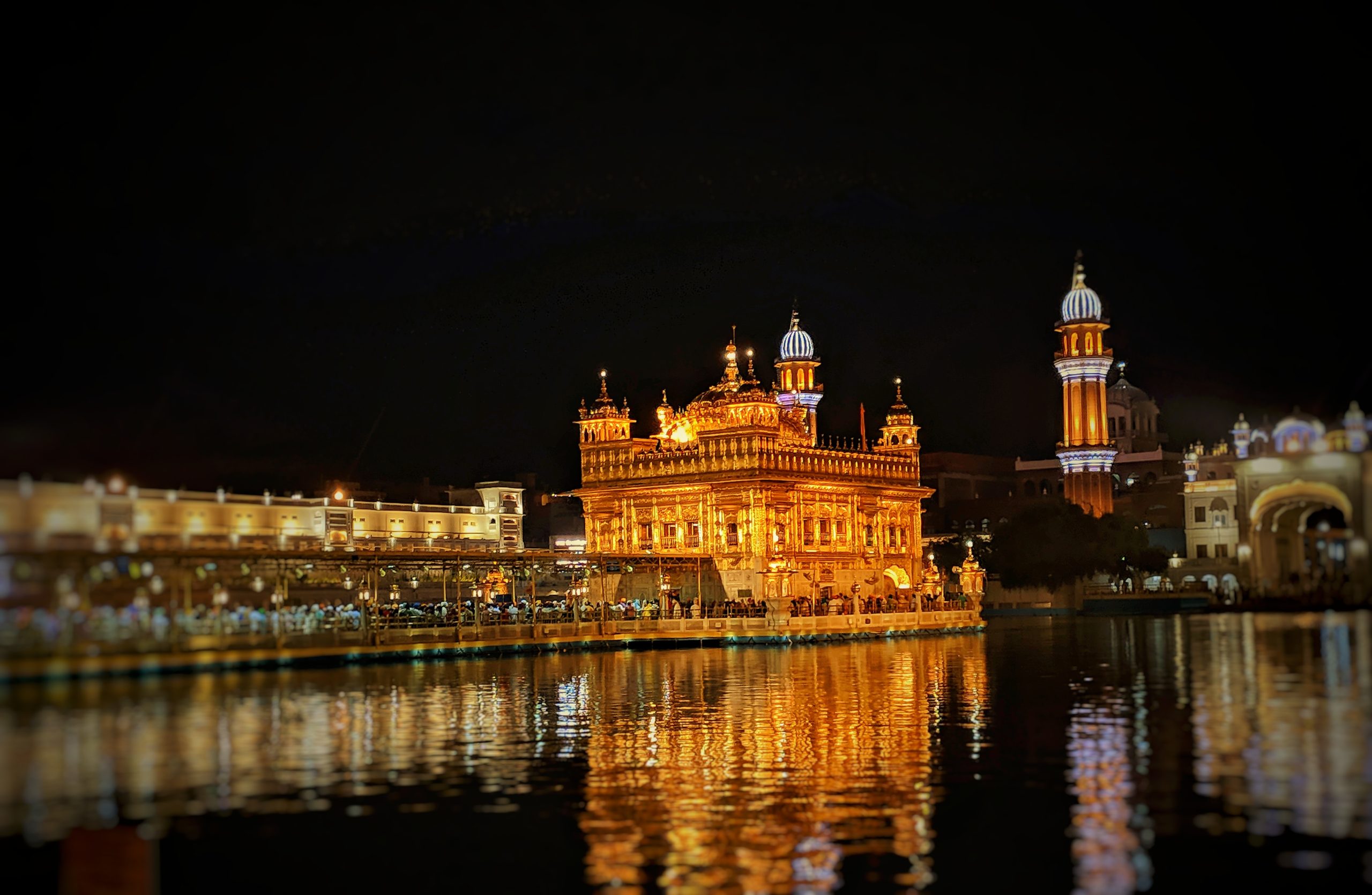 The Golden Temple in Amritsar is Sikhs’ spiritual centre. They feed 100,000 people daily for free at the temple. Yes, for real.   Photo by Harsharan Singh on Unsplash

By 1699, the community was being persecuted by the Mughal rulers. Many Sikh leaders (“gurus”) had been martyred and so, on Vaisakhi, the new leader, Guru Gobind Singh, created the Khalsa, which isn’t a sect but an optional extra commitment marked by a kind of baptism and whose members would be recognized by what they wore. The holiday Vaisakhi (also called Baisakhi) celebrates the birth of the Khalsa as well as the new year.

Khalsa Sikhs are recognized by wearing 5 K’s – kesh (uncut hair), kanga (comb), kara (iron bracelet), kirpan (dagger), and kachera (undergarments). Many of these items may have helped in self-protection (the hair plus turban acted like a helmet; the iron bracelet guards the wrist in sword fighting; the kirpan) but each item has a spiritual meaning too. The bracelet handcuffs you to God and asks if you are acting honourably in God’s eyes. The kirpan’s fuller meaning is described below. 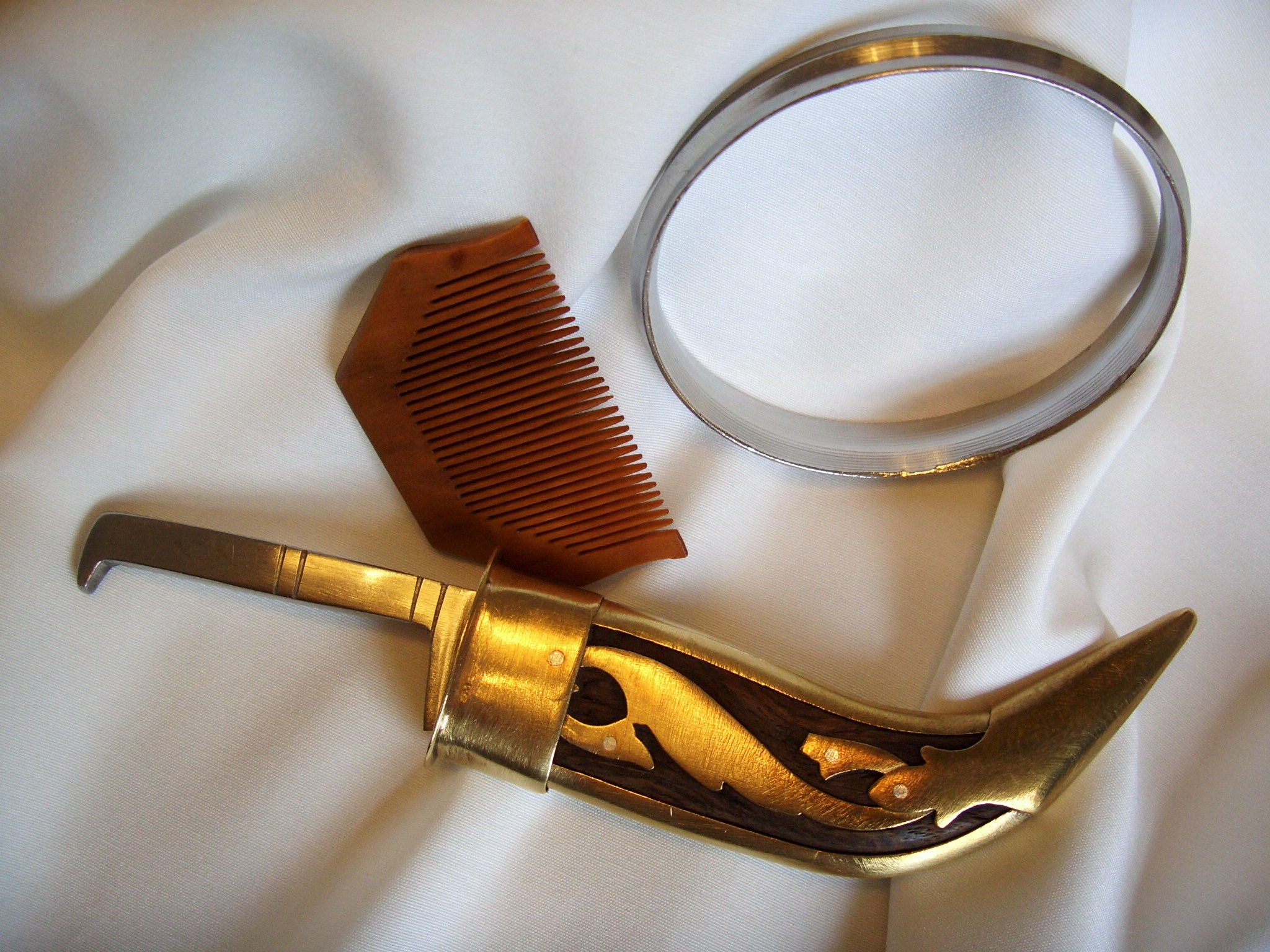 I Have a Few Questions…

So There’s Food Involved? – Sikh’s most distinctive practice is langar (which means ‘kitchen). Sikhs feed everyone who enters the Gurdwara (temple). It’s free! No donations basket is sent around. You sit, and you eat. People cook for you, serve you, and clean up after you. It’s amazing. I take thousands every year to places of worship and nothing inspires visitors as much as this practice. And the food…goodness me!

Why Do Sikhs Cover their Hair? – at temple, everyone covers their head. Some wear turbans but a simple bandana for a man or a headscarf for a woman will do (ball caps or hats are not appropriate). Extra head coverings are always at the doors for visitors. The temple contains the Sikhs’ holy book, the Guru Granth Sahib, and, in its presence, everyone covers their head as a sign of respect. Those who become Khalsa Sikhs wear a turban at all times.

“Sik” or “Seek?” – In English, the community is referred to as the “seeks.” But in Punjabi, the term is the “siks.” Either is fine but some might appreciate hearing the community’s own name used.

What’s In a Name? – Many Sikhs have the last name Singh or Kaur, given to men and women respectively to try to undermine caste distinctions. Efforts to move past caste always faced the problem that last names revealed one’s caste. So Guru Gobind Singh created these new last names to erase such distinctions. Western practices where women take men’s last name has made Singh more common than Kaur.

Why do Sikhs Wear Daggers? – Khalsa Sikhs wear the kirpan or dagger (non-Khalsa generally do not), typically under the clothes. The kirpan reminds Sikhs that they are called to be “sant sipahis” meaning saints and soldiers. One must be virtuous and kind but also be willing to fight against injustice, even at personal risk. The kirpan is not a utilitarian item for tightening a screw or cutting food. It is to be drawn to save a life, either one’s own or that of another. 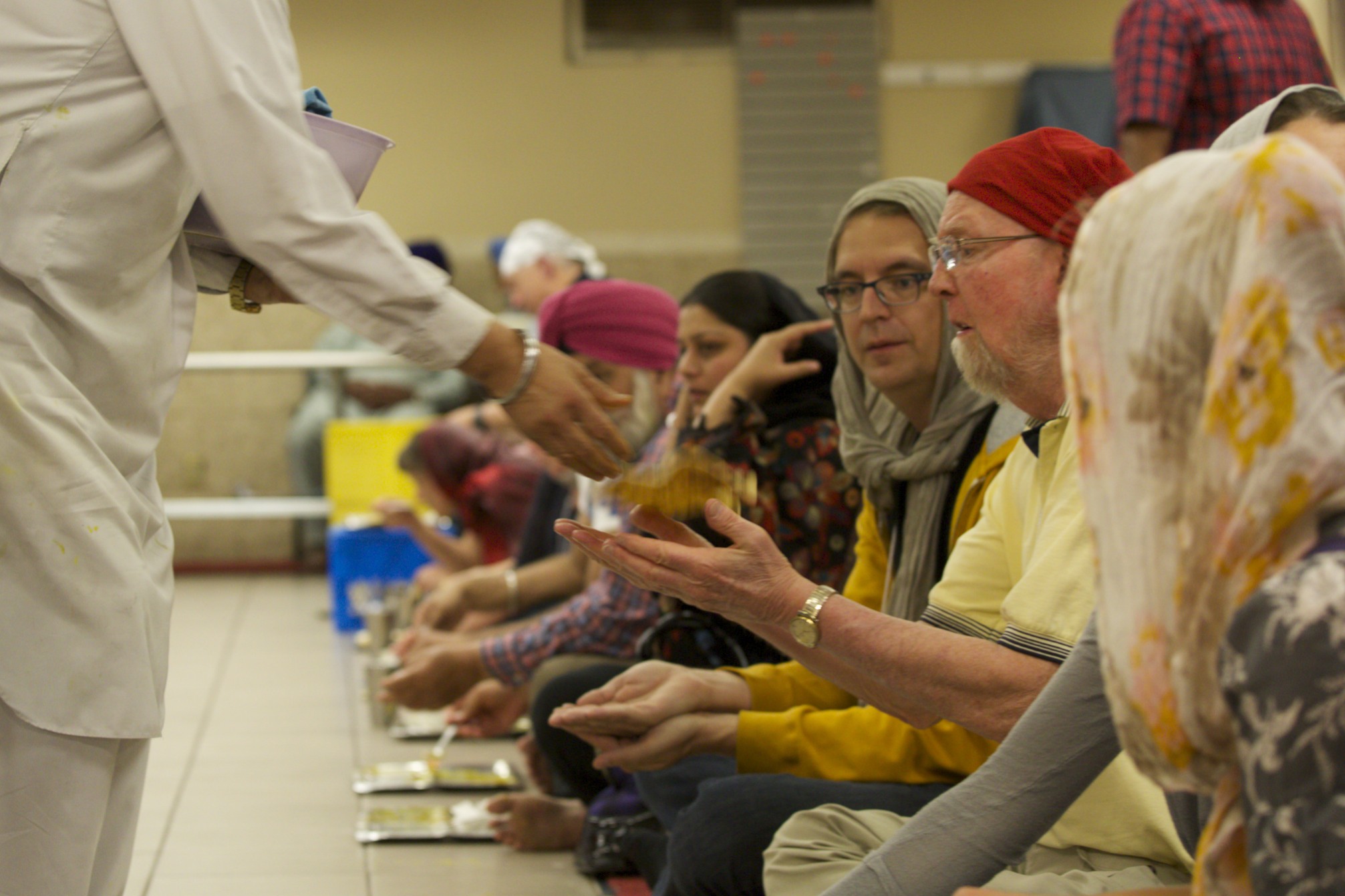 One of innumerable groups I have taken to be fed by the Sikhs. Sometimes fed in more than one way.

I greatly admire the Sikh community. There is a real commitment to service, which children are schooled in from a young age by serving in the langar. It has made the Sikhs a very charitable and service oriented community. If you know a Sikh, wish them a Happy Vaisakhi or happy new year.