Holi – The Hindu Holiday on Colour, Love & the Power of Stories

Sunday and Monday, Hindus around the world will celebrate the festival of Holi. And I do mean celebrate! For sheer joy, Holi deserves some kind of prize, marked by throwing water and coloured powder on others. Look at the image below and tell me that doesn’t look like fun! But this festival actually is a great window into understanding Hinduism. 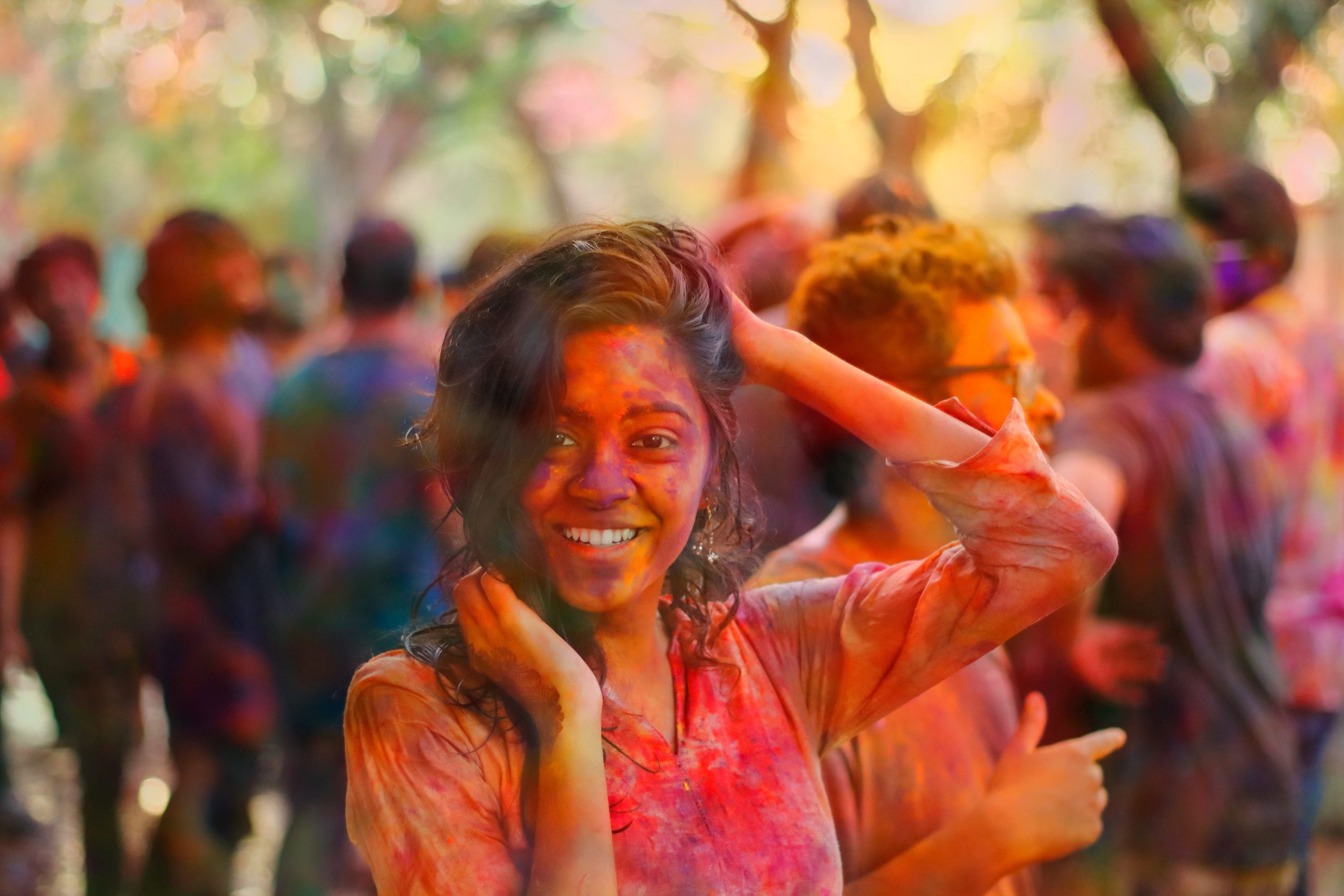 Photo by Shubham Bochiwal on Unsplash

What does Holi Celebrate?

It depends. There are multiple stories. Let me tell you one story both for its richness and for what it teaches us about Hinduism.

Perhaps the most popular story around Holi involves a demon king named Hiranyakashipu (easier to pronounce if you split it as Hiranya-kashipu). The king had earned a blessing that meant he could not be killed, neither by a human nor an animal, neither at day nor at night, neither indoors nor outdoors, neither on land, nor in water or air, and neither by a handheld weapon nor a thrown weapon. The king felt unbeatable, grew arrogant, and demanded everyone worship him as a god.

His son, Prahlada, would not and insisted on offering worship to the god Vishnu. (Side note: it is truly hard to get your kids to worship you.) The king, enraged, punished his son but Prahlada did not waver. Finally, the king’s evil sister, Holika, tricked Prahlada to sit on a funeral pyre with her. She had a cloak that would insulate her from the fire but when the fire blazed, the cloak flew off of her and surrounded Prahlada, causing her death.

Vishnu, realizing King Hiranyakashipu had to be dealt with, came to earth in the form of a half-lion, half-man (thus neither human nor animal), came at dusk (neither day nor night), took the king to a doorframe (neither indoors nor outdoors), put him on his lap (neither land nor water nor in the air), and killed the king with his lion claws (neither a handheld weapon nor one that was thrown).

Isn’t that a fantastic story? Another story involves Krishna and his love for the woman Radha and so the holiday also celebrates romantic love but let me point out what this story above highlights about the Hindu tradition: 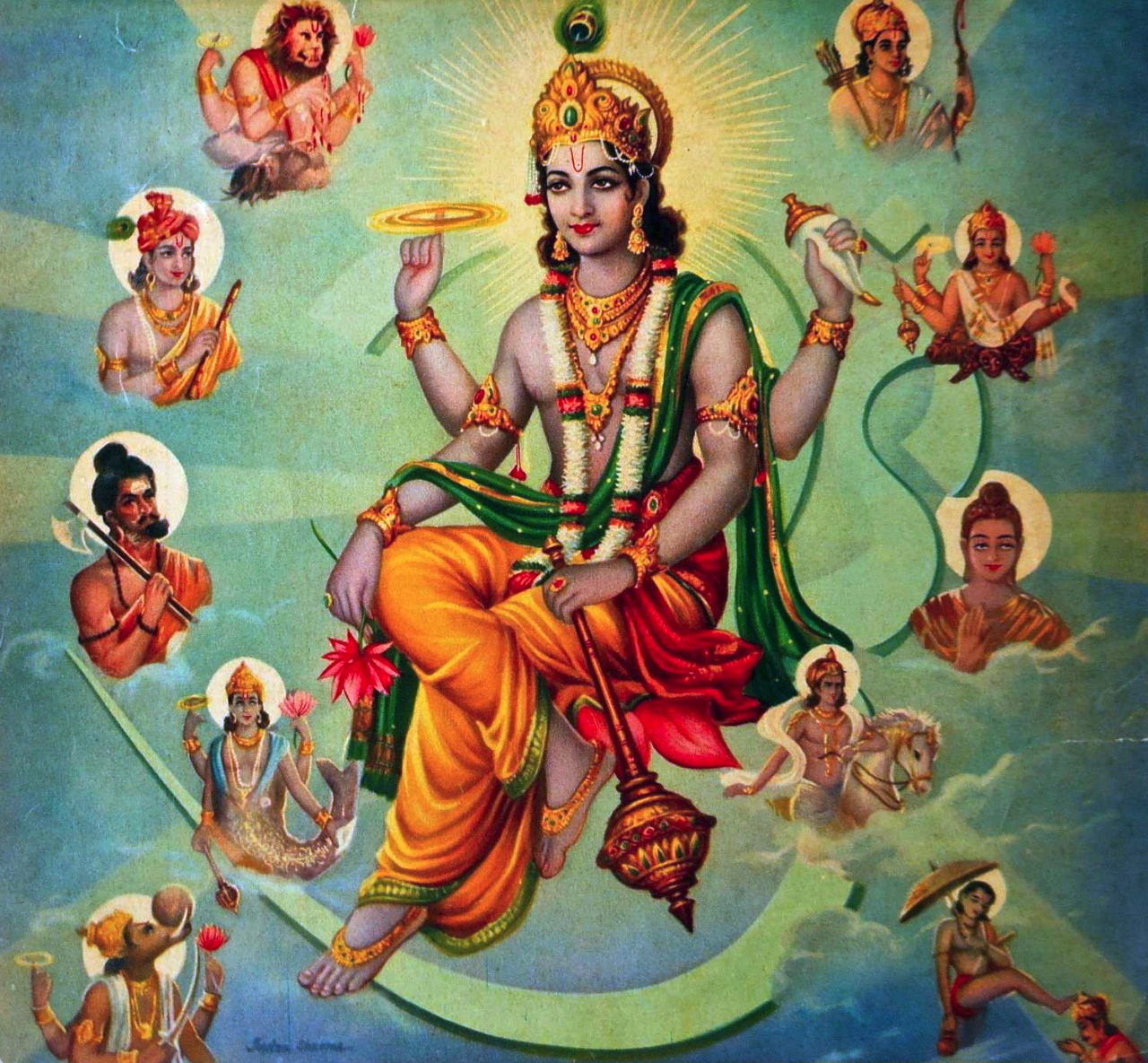 Vishnu with the avatars (forms) he assumes to return to earth. Top left is the part lion, part man avatar.

First, Hinduism is plural, not singular. There are many gods and many stories and to outsiders this can seem somewhat baffling. But these stories are understood at different levels. For some, they can exist side by side without a need to reconcile them, while others see a deeper unity behind the stories, the sort of unity that might require a teacher to fully comprehend. In either case, truth is always only every partially grasped and Hinduism offers many paths, many openings for people to find their way.

Second, Hinduism centres narratives more than doctrines. Doctrines must be pinned down, they must systematically fit, and they can sometimes lead to hair-splitting. Many religions – from those of Ancient Greece, to Native American, to Hindu traditions – place more emphasis on narratives. The stories form part of a repertoire of tools (including bodily practices, rituals, mediation, etc.) that aim to transform the self. The most profound truths require a transformed self and cannot be laid out on paper.

Third, Hinduism is less belief-centric. Across India and beyond, Holi will be celebrated in similar ways (water, coloured powder, music, delicacies) but the specific stories can vary. Westerners are used to Christianity’s strong emphasis on belief but in Hinduism, belief shares the stage more with practices, rituals, and traditions, where the latter can include everything from meditation to dietary practices to dance.

The story above encompasses all three of these aspects. Vishnu is not simply an animal or a human but both/and. It is not simply day or night but both/and. This is the multiplicity of a tradition that reconciles opposites and confounds linear thinking. The son pleases Vishnu not through belief but through practice – through worshipping him, since belief does not trump all in Hinduism. And of course, it is narrative rather than doctrine.

If you have a Hindu colleague or neighbour wish them a happy Holi! In a talk I gave to a high tech firm this week, an employee from a religious minority noted how much they appreciate it when someone acknowledges their holiday. We all like to be seen! And you don’t even need to get wet or throw coloured powder (although it sounds pretty tempting).

I’d like to thank Hiren Mistry & Dr. Raj Balkaran for their input and feedback on this post.