This fall, my twitter feed came alive with people raving about a new book about America’s White evangelicals, titled Jesus and John Wayne. I was finalizing my PhD dissertation so I studiously resisted buying the book. As the weeks went on, evangelical twitter kept hyping this book by a Christian author with a foot in American evangelicalism (she calls herself “evangelical adjacent”) who was nonetheless critiquing the tradition.

Folks, I can see why. Kristin Kobes Du Mez’s book is wonderful, packed with fascinating content and eminently readable with nice, short chapters. I have rarely written “wow” in the margins so much and evangelicalism is in my wheelhouse (subject of said dissertation).

Du Mez convincingly shows that White American Evangelicalism (WAE) has been animated by a passion to protect, defend and enhance white patriarchy. This tendency has deep roots but surged in the 1960s when three big issues – Vietnam, Civil Rights, and feminism – each challenged White patriarchy (Vietnam challenging authority figures while the other movements demanded equality for others). 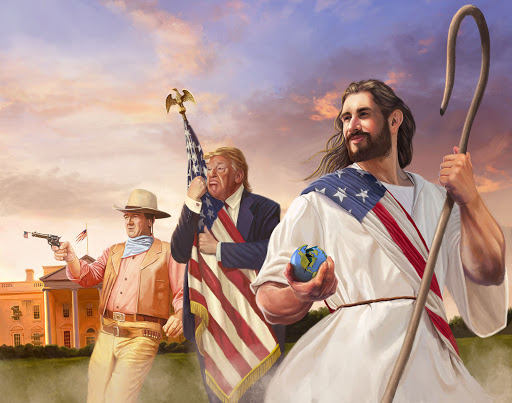 How does this fit with Jesus? Well, Jesus, you will learn, is a tough guy, a blue-collar carpenter with muscled arms. Time and again, they reject the “pussification” of Jesus who will bring peace only after destroying his enemies in the end-times. As for John Wayne, Du Mez could not ignore his multi-decade popularity with evangelical culture including in sermons, books, and posters. Wayne was not especially Christian, could be crass, had multiple affairs, and divorced twice. But he personified male toughness. When Ronald Reagan ran against Jimmy Carter, evangelicals dismissed Carter – an actual evangelical and Sunday school teacher – and his “wimp factor,” instead backing the divorced and remarried movie actor with the strong jaw and the tough Cold War talk. Later, they became big fans of the movie Braveheart and even of Fight Club, incorporating both into male retreats, masculine rituals and books on manhood.

There is too much richness in the book for me to recount. One chapter details the deep connections with American militarism and evangelical penetration of the military while another shows how many of the prominent evangelical leaders eventually faced accusations of sexual assault and/or domineering and bullying behaviour of subordinates. Crushingly, the patriarchy forgave many of these men and restored them to positions of authority.

Compellingly, so little of the critique comes from Du Mez – instead, she just keeps quoting people, summarizing popular books, and providing context and background. She lays evidence on the table and these WAE leaders’ speech does all the work.

Trump’s popularity with WAEs is therefore not an aberration but a culmination of the tradition’s ethos. The future is always unknown but her work points to the likelihood that WAE will continue to seek strong White males, perhaps risking the nation as a result.

Note: If any of you are on the app Clubhouse, I will be hosting a session with the author Kristin Kobes Du Mez on Sunday at 2pm EST. We will be joined by Jack Jenkins who is one of America’s top religion journalists and author of a recent book on the American religious left. Clubhouse is new and only available to folks with iphones but if you have one, come join us.