Today is Christmas! Well, at least it is for about 200 million Eastern Orthodox Christians who form Christianity’s third large branch. While Catholics and Protestants celebrate Christmas on December 25th, many (but not all) Orthodox churches celebrate on January 7th. In the 16th century, much of Europe adjusted to a new Gregorian calendar – named after Pope Gregory – but the Orthodox had rejected papal authority and thus rejected his new calendar.

Christianity’s first major split was not the Protestant Reformation but the Great Schism in 1054 that sundered what became Eastern Orthodoxy from the Roman Catholic Church. The cause of the split was primarily two-fold. First, the eastern part of Christendom (what had been the Roman empire) spoke Greek while the Western part spoke Latin. That caused problems – certain key theological terms did not translate well across languages and the differing languages fostered two different cultures as leading thinkers and writers often only read those who shared their language. Over time, this led to a drifting apart.

Second, the Greek speaking eastern churches never accepted the claim of the bishop of Rome (known as the pope) that he had authority over the whole church. Things came to a head over a theological dispute about how the three persons of the Trinity related to one another. Today, many Christians might find this issue hair-splitting but it mattered then and, given the long history of tensions, acted like a spark on a dry hay bale. The Eastern Orthodox Churches wanted no new pope so there are 14-16 regional organizations each with its own head bishop, independent of the other. Examples of these organizations include the Russian, Serbian, Greek, and Ukranian Orthodox Churches.

Orthodoxy prides itself on maintaining tradition! Liturgies trace to the 5th century, music is ancient chant (no guitars thank you), and even in Western cultures, much of the service is often done in traditional languages. Other notable features include a deep reverence for Mary, the priest’s back faces the congregation during the service (as Catholics did pre-Vatican II), and priests can be married though bishops are not.

One last note: Orthodox churches are icons of beauty. They feature literal icons, traditionally made two-dimensional art that in some cases, cover the entire interior of churches. The icons are two-dimensional to avoid creating graven images (idolatry) and are intentionally not too lifelike to remind the viewer that these are icons and not idols.

If you’ve never been in a beautiful Orthodox church, surrounded by icons, with incense filling the room, and ancient chant gracing your ears…well, you’re missing something. (And to solve that problem, you may want to check out Encounter World Religions’ Discovery programs.) 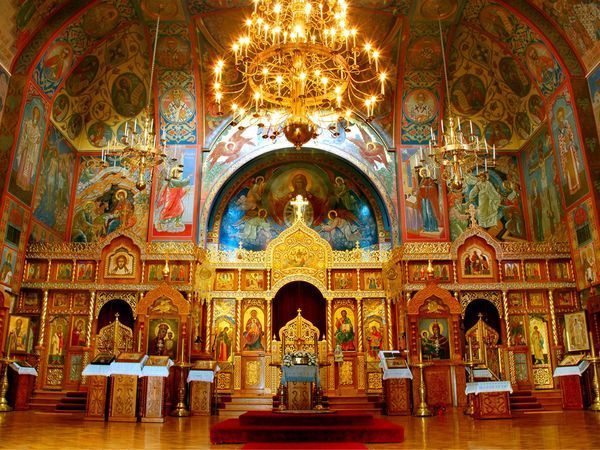 Orthodox Churches can be covered in icons, surrounding you in a bubble of beautiful art. None of the artwork has the painter’s name because the art is to show no individuality. Instead, the icons are to be exact replicas, copied exactly for century after century.