The New & the Old: Female Qur’an Reciters and Instagram

No religion is a monolith. Every tradition changes over time and varies according to cultural contexts. In many Islamic contexts, women have been prohibited from chanting the Qur’an. The concern has been that male listeners would have their minds on something other than God. (There are many possible responses to this but I’ll leave that aside). This BBC podcast wonderfully explores some female Qur’an reciters who are challenging this norm.

The podcast interviews a few such reciters (they’re great to listen to!). The women themselves are young, smart, and motivated by the beauty of the text and their desire to chant. Women’s equality is a global force that leaves its imprint in a million ways. Here it is changing the very sound of Islam.

The interviews nicely bring to our attention the role of beauty. Donovan Schaefer, an academic I admire, suggests religious language is less about transmitting content and more like love language. It attempts to sway your heart, perhaps to seduce you, to make you fall in love. That describes the Qur’an very well, a text meant less to be read than to be recited. Scholars note that its oral beauty was pivotal in winning over converts and it is hard to know how Islam would have fared without a scripture whose poetry penetrated so many hearts.

Lastly, note also the contribution of technology. Time and again, the interviewees recount using platforms like Instagram that allow them to reach the public directly, thus bypassing any traditional gatekeeper. These social media platforms sometimes circulate conspiracy theories but at other times, they are wonderfully democratizing. Hence, an app designed in 2010 is allowing people across the world to listen to a Muslim woman in Scotland recite a poetic 7th century text. Compared to everything else in 2020, that doesn’t seem strange at all. 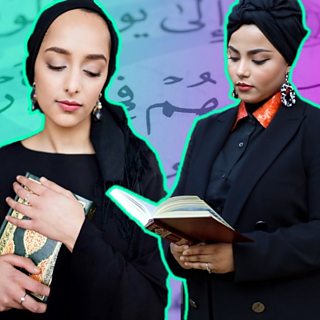