I track religion stories (surprise!) and these days, almost all of them are about politics. Politician X’s faith, how religious group Y will vote in the US election, or state oppression of religious minorities in India or China – religion and politics are everywhere.

Often, people claim that religion and politics don’t mix but the truth is they are inextricably entwined.

Many believe religion should avoid politics but I’m less certain. Should African-American churches stop addressing systemic injustice? Should First Nations spiritual practices not speak to issues of governance? I do believe in separating church and state (i.e. institutional separation) but suggesting religious communities avoid all politics essentially marginalizes them.

Typically, I find this comment is spoken about religious communities the speaker disagrees with. Liberals often object to the political utterings of American evangelicals like James Dobson or Jerry Falwell Jr. but rarely complain about Martin Luther King or Gandhi, both of whom ground their politics in their spirituality. King’s religion and politics were inseparable, his speeches awash in Biblical metaphors as he harnessed the country’s dominant religion to speak to American hearts. His success was partial – he changed a country but when murdered, was possibly the most disliked people in America, with 75% disapproving of the reverend.

For a simpler example, let’s turn to America’s other religion – football! (Disclosure: I am a devotee). When African American NFL player Colin Kaepernick protested racial violence by kneeling during the American anthem – partly because his deep Christian faith compelled him to speak up, even though his wealth and fame would likely insulate him from police brutality – Republicans who often advocate for a public faith, vehemently opposed not only Kaepernick’s stance, but for daring to wreck a football game with his politics. A few years earlier, however, many conservatives gushed over a White quarterback named Tim Tebow who public expressed his faith on the field and wrote Bible verses on his face. Although not overtly political, it really was. No Muslim football player could have written Qur’anic verses on their face and been cheered. Tebow’s acts spoke of the nation’s identity at its nationalist sporting event and of who owns public space. Some Americans loved Tebow, some loved Kaepernick. Few loved both. 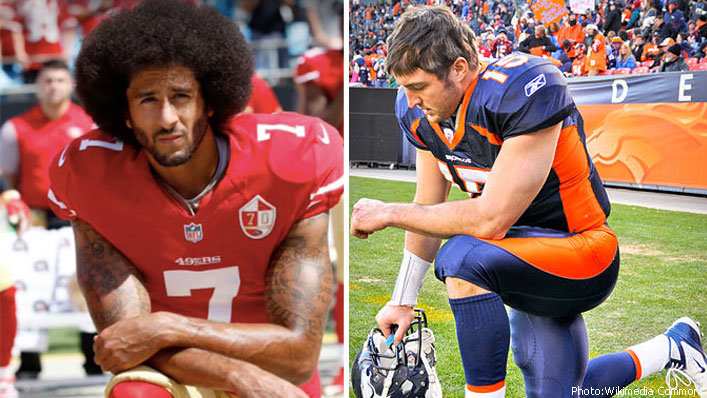 In truth, most religious texts and traditions speak about justice, injustice, morals and the proper order of society. All of this is political. That doesn’t mean every intervention is productive or that it fosters justice (Canada’s Residential Schools fostered horrible injustice) but it does mean religion and politics have always been and always will be linked.