Roe vs. Wade & the Real Birth of the American Religious Right

One often hears that the American Religious Right was born from anger at the court decision Roe v. Wade. This story is popular amongst the Religious Right and often repeated in the media and elsewhere. However, that story is not true.

American evangelicals form the heart of the Religious Right but in truth, evangelicals were originally mixed on Roe v. Wade. The Southern Baptist Convention even announced their approval of the ruling. Evangelicals at the time tended to see the pro-life position as a Catholic one, which they deemed “unbiblical.” The Bible is not a strong pro-life document. One critical passage makes a clear distinction between the loss of a fetus and the loss of any other life:

22 When people who are fighting injure a pregnant woman so that there is a miscarriage, and yet no further harm follows, the one responsible shall be fined what the woman’s husband demands, paying as much as the judges determine. 23 If any harm follows, then you shall give life for life, 24 eye for eye, tooth for tooth, hand for hand, foot for foot, 25 burn for burn, wound for wound, stripe for stripe. (Exodus 21:22-25)

In short, the passage merely requires financial compensation for violence leading to a miscarriage whereas any other harm (e.g. perhaps the woman herself dies), justifies a life for a life. Hence – Catholic, unbiblical and not a widespread evangelical view. How, then, did things change?

This article by Randall Balmer, a historian and an evangelical himself, nicely summarizes how evangelicals’ initial anger was over IRS pressure to de-segregate Christian colleges (the IRS was denying charitable status to any school prohibiting Black students or inter-racial dating). Republican operatives saw an opening but searched for more palatable cultural issues to foster what they hoped would become a Moral Majority.

An additional factor not mentioned by Balmer is that abortion became linked by many evangelicals with sexual liberalism. Abortion for a mother seemed different than abortion as a tool that fostered promiscuity and would thus destroy the family and feminine virtue.

Balmer’s article cites a famous film Schaeffer made that toured the country’s churches and was a huge success in shifting evangelical views. Indeed, I know Canadian evangelicals who recall seeing it. In this way, abortion became about sexual virtue, about morals, about saving the Christian faith, and the country itself. 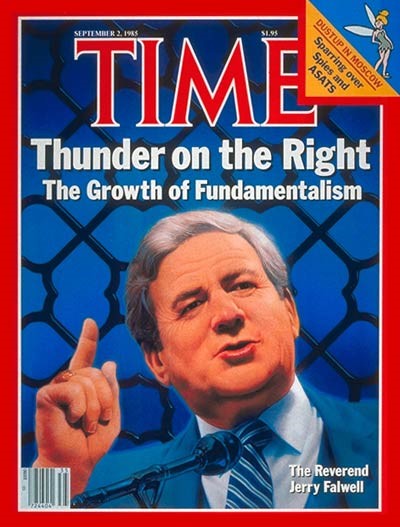 Reverend Jerry Falwell was pivotal to the birth of the American Religious Right and to the shift of evangelical views on abortion.